Link to this page

A young peasant girl, sleeping
Order a Hand-Painted Reproduction of this Painting 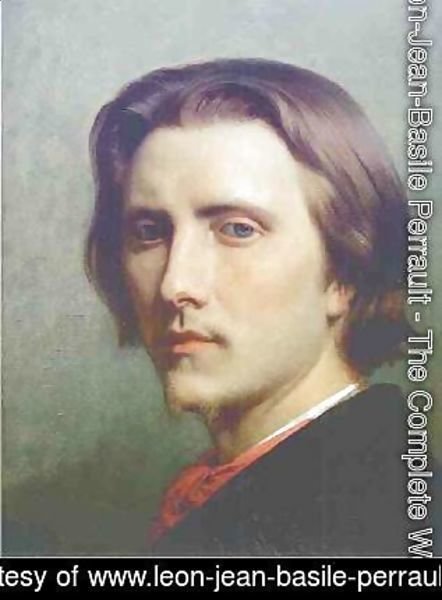 Leon-Jean-Basile Perrault was born in Poitiers, France on June 20, 1832 to a very poor family. As a young boy, he dreamed of ways to produce income to free his family from the pains of poverty. His foolish youthful dreams and impossible schemes to ease and escape the pain would bring young Leon Perrault to make the decision to pursue an artistic career.

At the age of 14, Perrault began taking drawing courses being offered in his hometown. His incredible talent for drawing was eventually spotted by a local painter who would hire this fourteen-year-old boy to help restore the paintings and murals in the churches and the ancient cathedral of Saint Radegonde in the Poitiers.

In 1851, Perrault would take part in a drawing competition and was awarded first place. The drawing was purchased by the state for their collection. Two years later, he would travel to Paris on a 600-franc pension provided by the town of Poitiers. With a letter of introduction, Leon Perrault was welcomed into the home and atelier of Francois Edouard Picot (1786-1868) where he would begin his formal art training. Perrault would continue his studies at the Beaux-Arts Academy, in William A. Bouguereau’s (1825-1905) atelier and at the Academie Julian. The initial years of academic studies and training under the watchful eye of Picot and Bouguereau would profoundly influence Perrault and his interest in allegorical and religious subjects. He would debut in the Paris Salon of 1860 with "Vieillard et les Trois Jeunes Hommes", inspired by a fable in La Fontaine. The painting now hangs in the Poitiers Museum. Perrault would become an important figure and regular exhibitor at the salons of Paris. He continued to exhibit religious, allegorical, historical military battle scenes. Perrault had enormous success with his "Christ au tombeau" and "la Descente de Croix" at the Salon of 1863 and was awarded metals in 1864, 1876 and 1878.

Of his most successful military scenes, "Le Mobillise" was an epic scene inspired by the valiant defense of an important episode during the Amerique war. When "Le Mobillise" was finally exhibited at the Musee Chateaudun, it gave the grandsons of the men who had fought the battle an idea of their bravery. His acceptance as an accomplished military painter would lead to several collaborative works with the studio of Horace Vernet (1789-1863). Most noted of these collaborative efforts done between 1862 and 1864 are; "Attaque de constantine: le colonnes d'assault se mettent en mouvement le 13 octobre 1837 (collab. w/studio, after H. Vernet)", "Combat de l'habra" (collab. w/studio; after Horace Vernet", "Siege de constantine: le ennemi repusse des hauteurs de coudat-ati (collab. w/studio; no.262)" and "L'assault final de constantine (collab. w/studio; no. 602."

We have now discussed his religious and allegorical subjects. We have approached his historical and military paintings. All of these works show extreme brilliants, elegant drawing and grace, which reminds one of Pierre-Paul Prud'hon (1758 - 1823) but few artists have ever challenged his symbolic genre. Leon Basile Perrault, as few artists before him, was able to bring passion, integrity and honesty to his paintings. His own childhood was tethered to the pains of poverty. His children speak through their eyes and whisper from their tender souls of innocence, joy, disparity and warmth. Perrault’s paintings were a brave departure from the doe-eyed peasant children of his friend and teacher, William Adolph Bouguereau. They aren’t expressing sorrow but the reality of life through subtle expressions that gently reveal the subject’s inner thoughts, strength, youthful maturity, hope, dreams, and responsibility toward life and family.

In 1868, Leon Basile Perrault would be invited to exhibit " Give for My Little Chapel" at the Boston Athenaeum and in 1873, he was appointed to represent France as "diplôme d'honneur" to Vienna, Philadelphia (U.S.) and London.

Perrault died in Royan, France in 1908, and was buried in the Montparnasse cemetery. After his death, the village of Poitiers commissioned a monument in his honor. (From fineoldart.com)

Report an error on this page